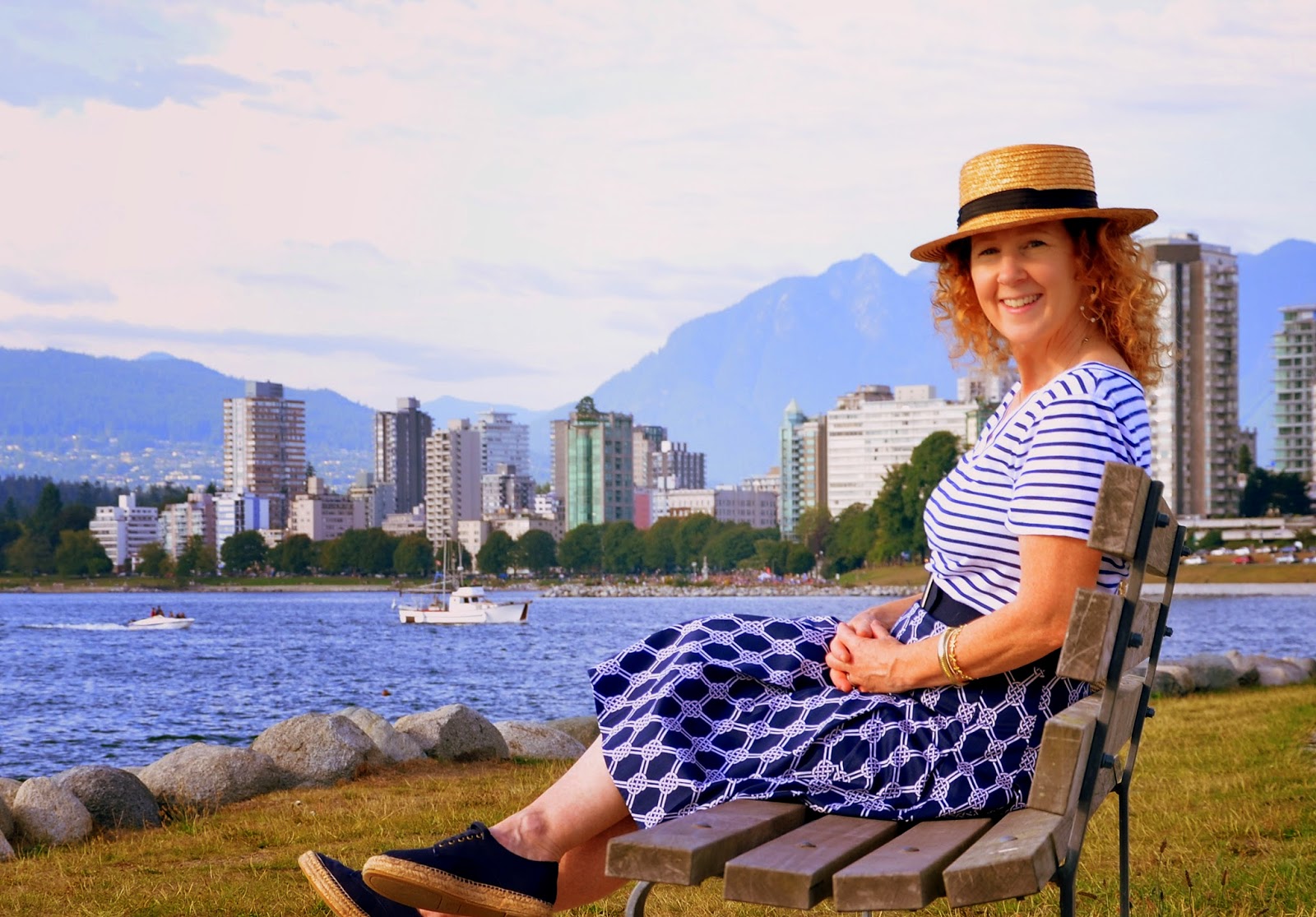 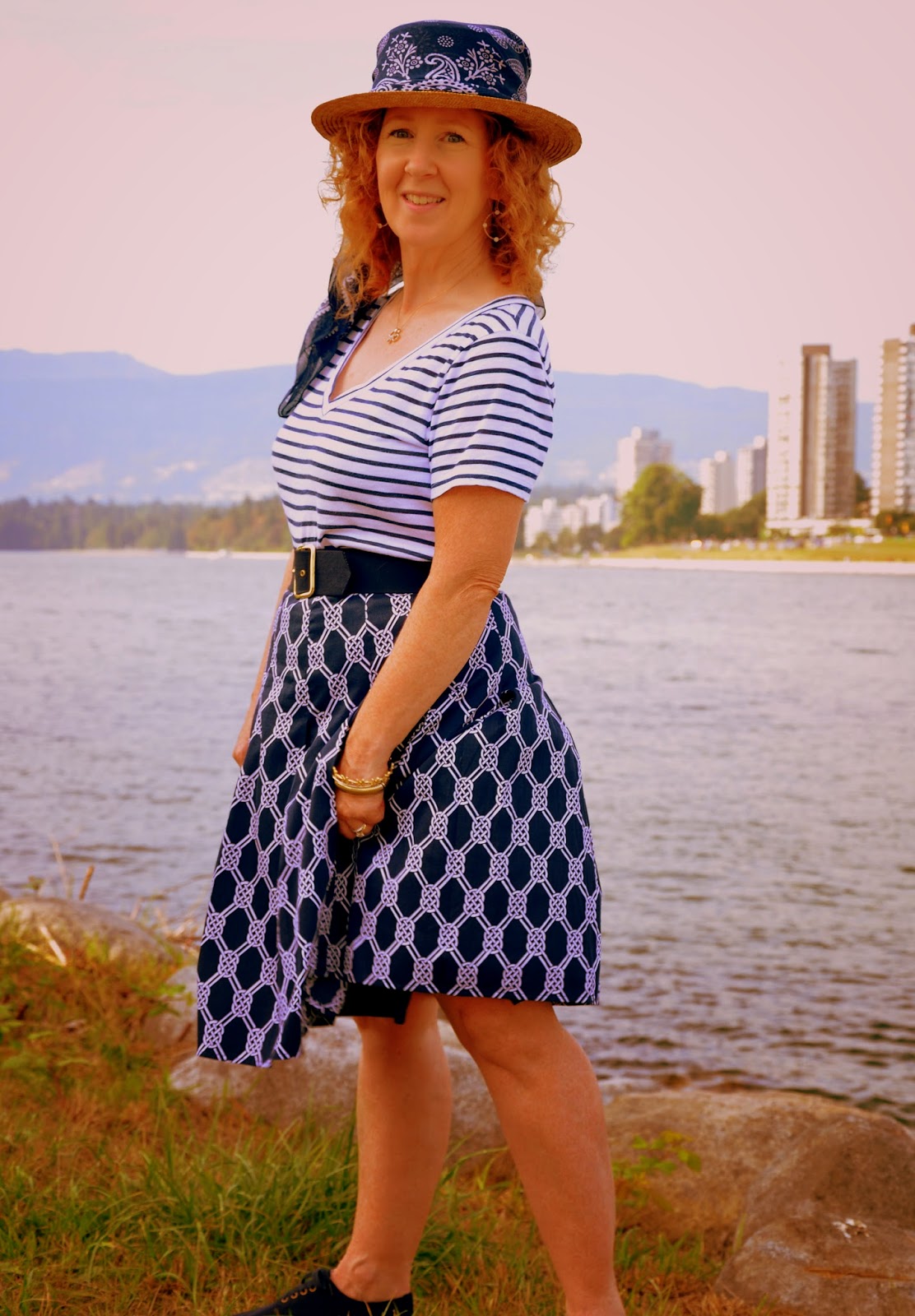 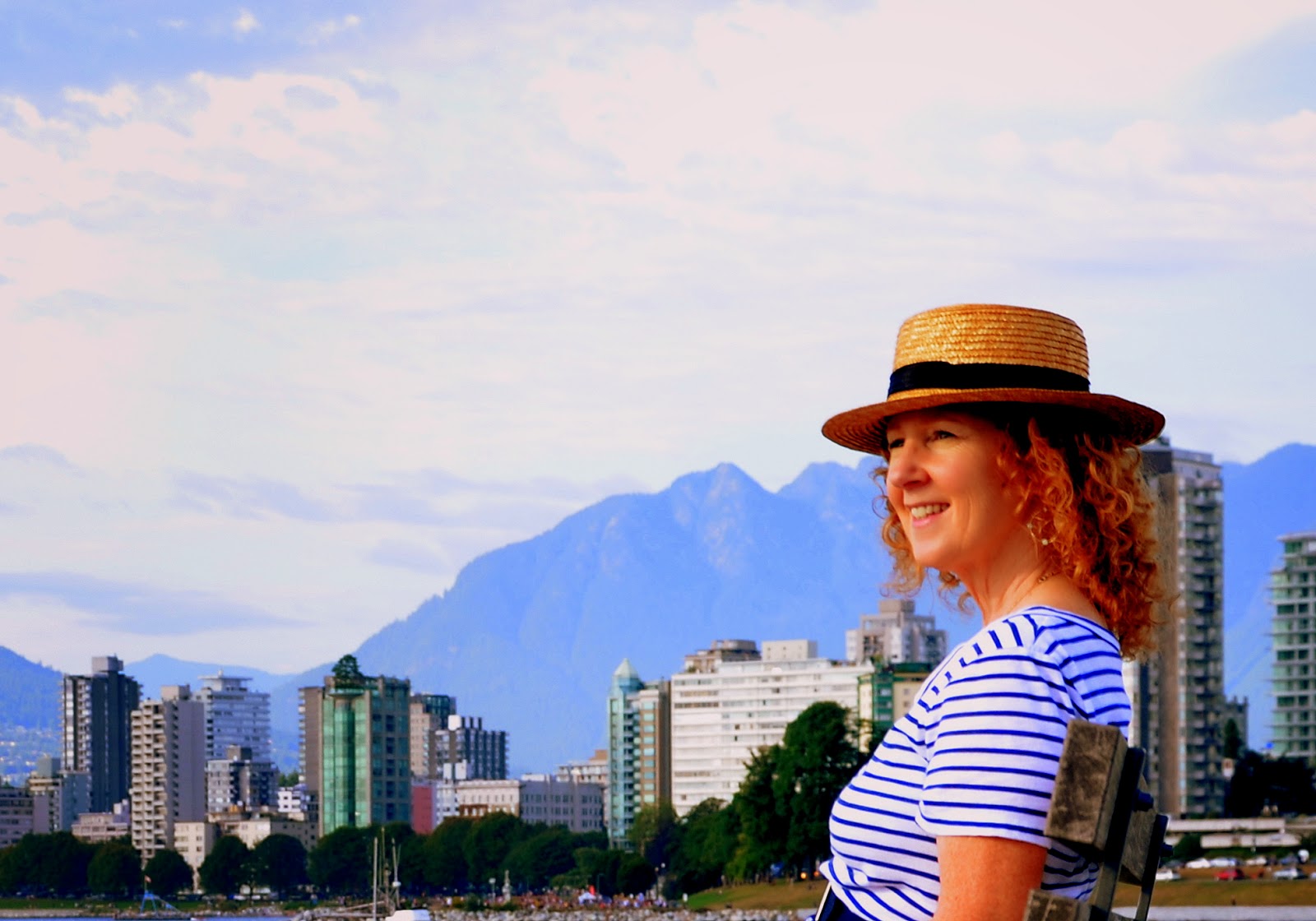 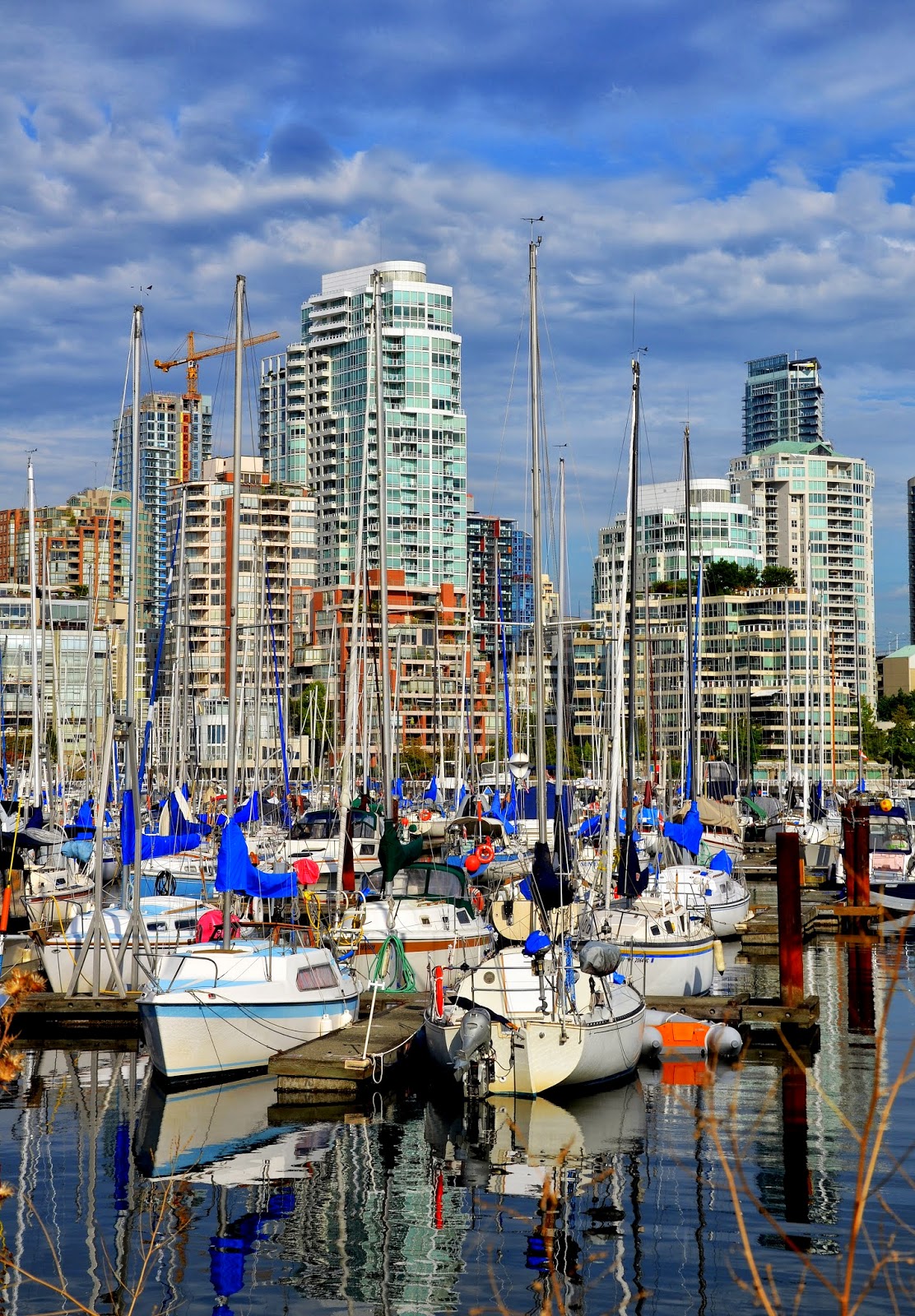 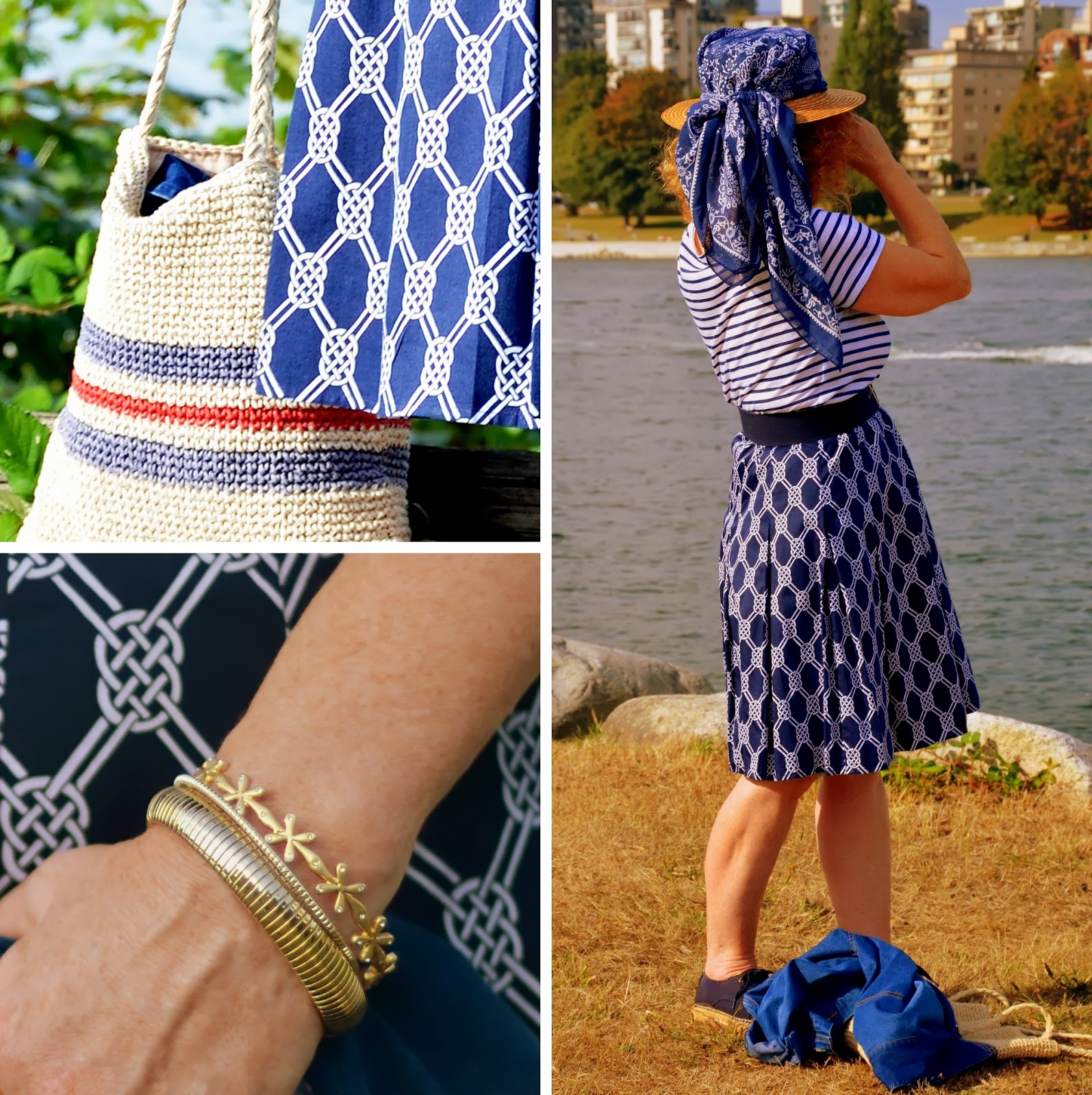 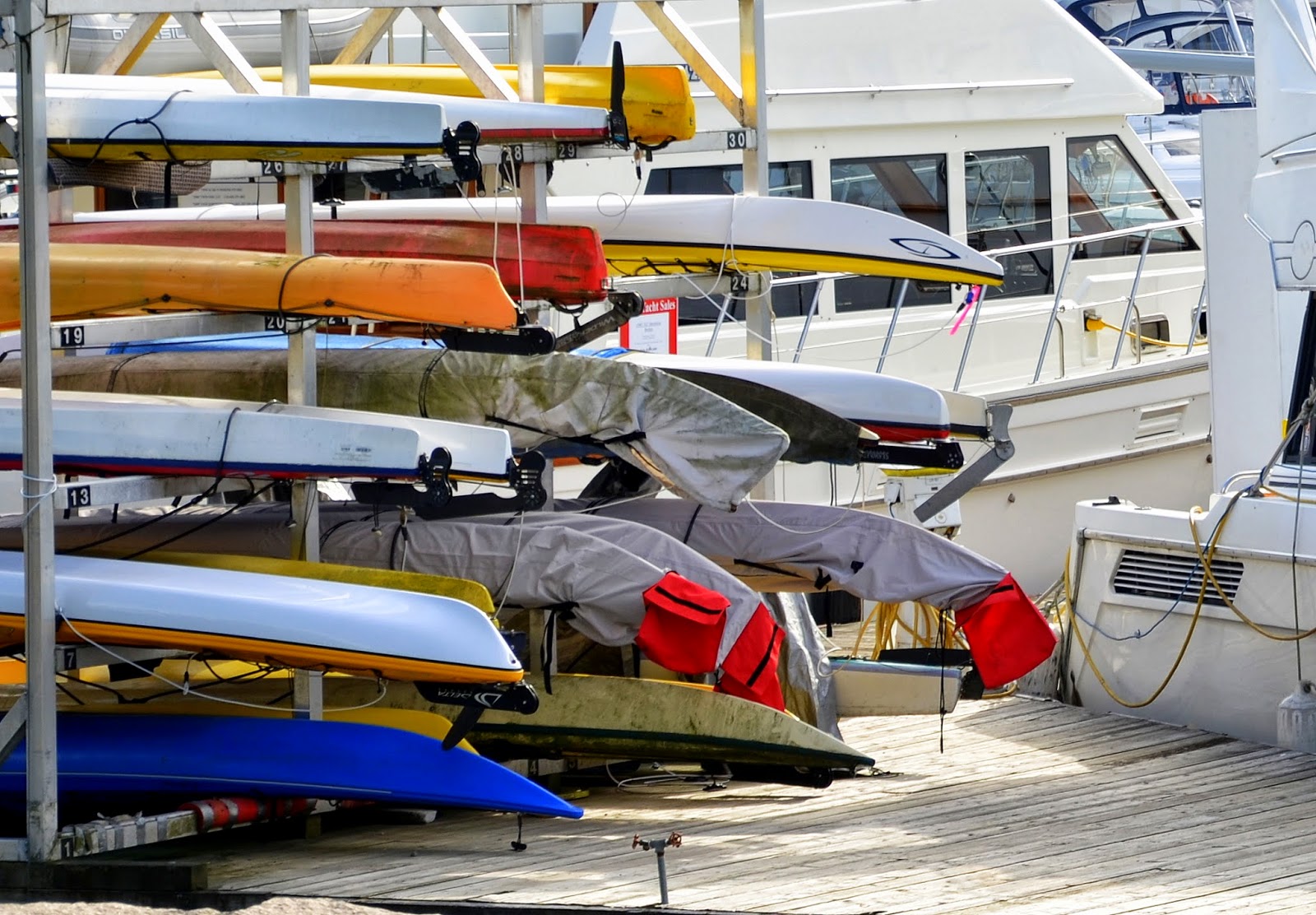 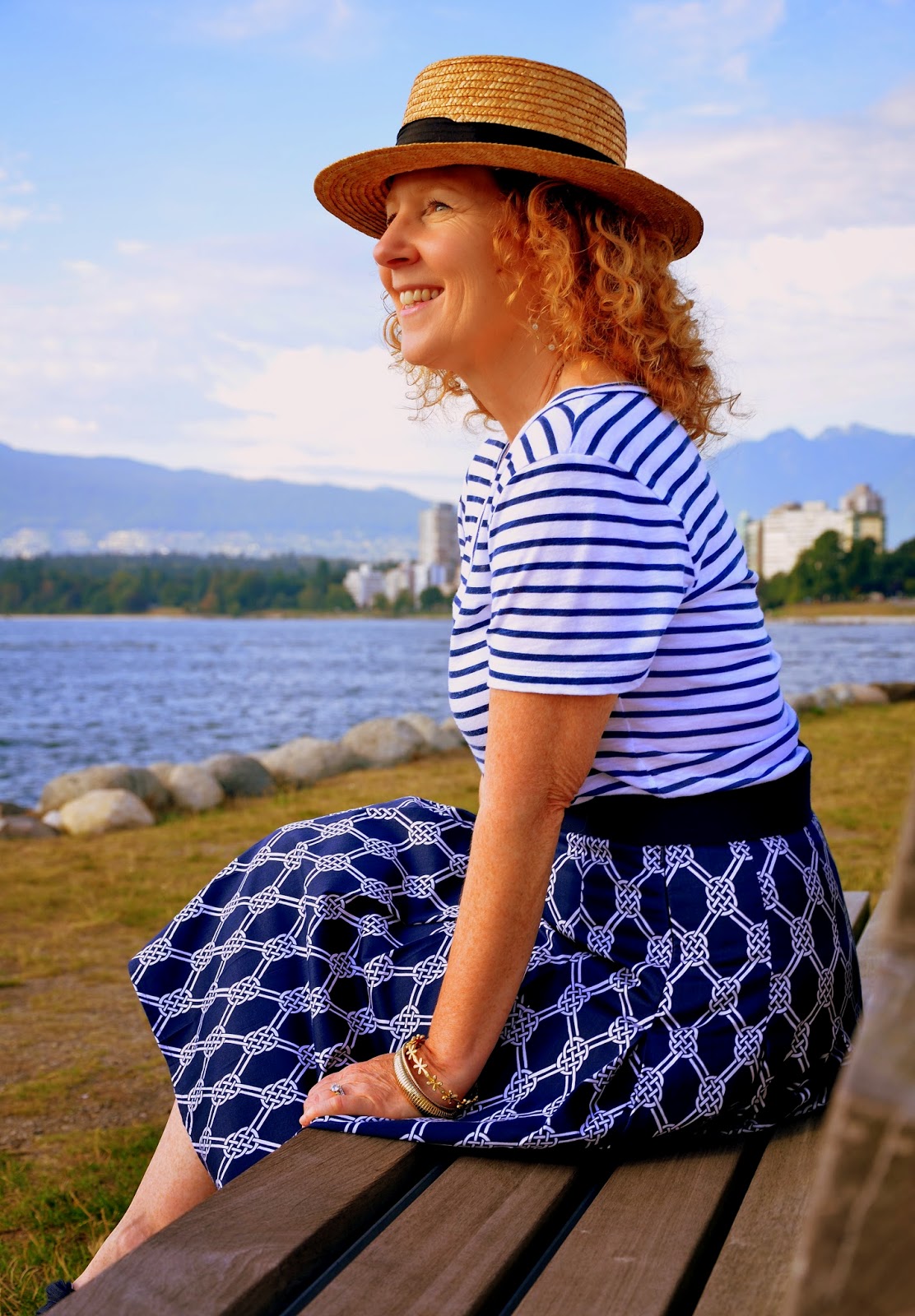 {My DYT Type One Style  Pleated Skirt   Jones New York Signature, thrifted
Navy and White Striped Tee  Old Navy
Blue Espradrilles   Aldo Shoes
Straw Boater   Thrifted, and last seen here}
Hallo, hallo my friends!  It’s the first of the month, and that can only mean Hat Attack over at lovely Judith’s blog, Style Crone.  Yes, I’m a few days late, but better late than never I say.  It could be said that I was being quite literally attacked by my hat.  GAK!!!  Maybe not an epic fail, but this outfit failed to please in more ways than one.  In an effort to jazz up my {yawn} straw boater, I wrapped it up in a blue and white scarf.   At first, I thought it looked cute, but it quickly felt all wrong for me.  My type one movement felt weighted down…and once I removed the scarf, I felt soooo much better.  And I looked better too.  Then there was the issue of the skirt.  Yeah, um, the volume, length, fit…I don’t know…if I could have removed the skirt like I did the scarf I would have been a much happier camper.  To be fair, when I purchased it way back in the spring, I knew the fit was off.  But, hey, no worries.  I’m a star seamstress {hah}.  A nip here {it’s too big in the waist}, a tuck there {it’s too long for my frame}, and voila…the perfect nautical inspired skirt.  Fast forward to the tail end of summer, and silly me thinks I can get away with wearing it as is.  What’s a little extra volume?  Apparently, not such a good thing, that’s what.  It just doesn’t work.   I’ve chosen the best photos of the bunch.  And a bunch there was.  The mister tried real hard to make me shine and look five foot nine.  And speaking of making me shine, the brilliant white glare otherwise known as my legs was seriously distracting.  I’m not tan, just warmified via Picasa.  Muah-ah-ah-ah-ah.  Let’s see, any other confessions, disclosures?  Nope, I think we’re clear.   My weekend?  Fabulous, thanks!  These photos were snapped yesterday; a brilliant day for a walk throughout Granville Island and Kitsilano, wrapping up with Mexican food and a margarita in Vancouver’s West End.  Sunday…a glorious afternoon wiled away at Backyard Vineyards.  Ah, summertime… 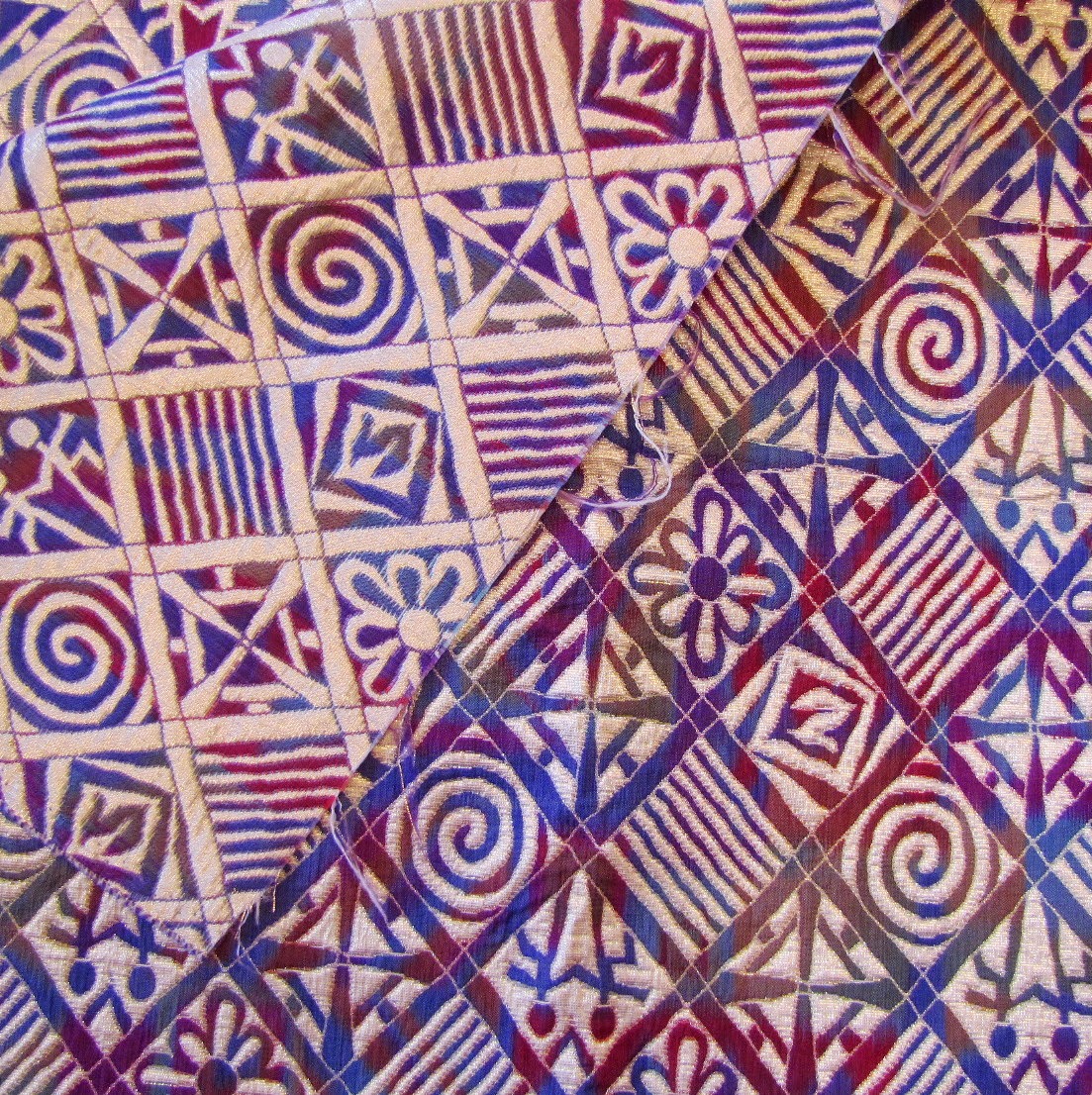 Last, but not least, I wanted to share a photo of this fun fabric that I picked up for a song at Value Village’s 50% off sale.  It makes me think of you, Judith!  It isn’t showing up well in the photo, but imagine it woven with metallic threads, all shiny {in a good way}, and iridescent!   Both the right and wrong side of the fabric look very cool, I think.   I’m looking forward to making some magic happen with this…maybe by next month’s hat link up…hint, hint.   I have a few other projects nearing completion, so we’ll see!

Cycling the Fort to Fort Trail… 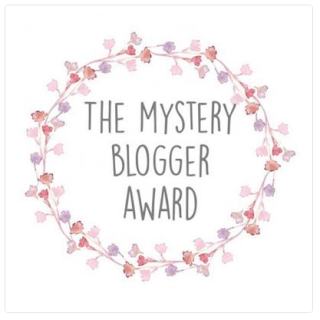 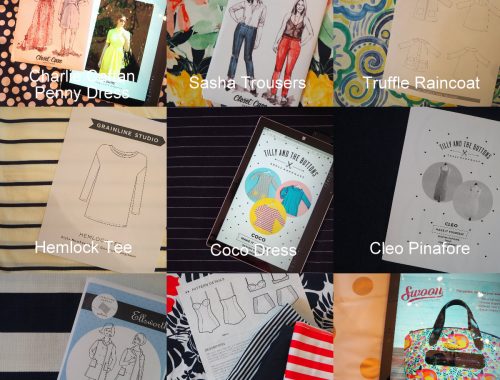